A young web designer once told his teacher ‘just get to the meat already.’ He was frustrated with what he called the ‘history lessons and name-dropping’ aspects of his formal college course. He just wanted to learn how to build Web sites, not examine the reasons why.

Technique and theory are both integrated and necessary portions of a strong education. The student’s perspective has direct value, but also holds a distinct sorrow: Knowing the how without the why creates a serious problem. Without these surrounding insights we cannot tap into the influence of the history and evolved knowledge that came before. We cannot properly analyze, criticize, evaluate and innovate beyond the scope of technique.

History holds the key to transcending former mistakes. Philosophy encourages us to look at different points of view. Studying media and social history empowers us as Web workers by bringing together myriad aspects of humanity in direct relation to the environment of society and technology. Having an understanding of media, communities, communication arts as well as logic, language and computer savvy are all core skills of the best of web designers in today’s medium.

‘The computer can’t tell you the emotional story. It can give you the exact mathematical design, but what’s missing is the eyebrows.’ – Frank Zappa

Media is meant to express an idea. The great media theorist Marshall McLuhan suggests that not only is media interesting because it’s about the expression of ideas, but that the media itself actually shapes the way a given idea is perceived. This is what McLuhan meant when he uttered those famous words: ‘The medium is the message.’

If instead of actually serving a steak to a vegetarian friend, what might a painting of the steak mean instead? Or a sculpture of a cow? Depending upon the form of media in question, the message is altered. 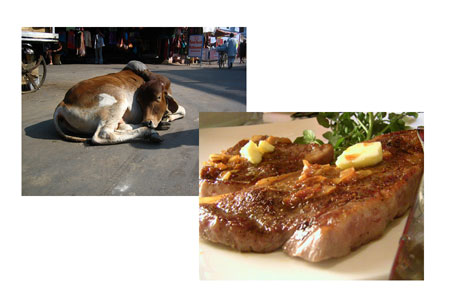 Must we know the history of cows to appreciate the steak on our plate? Perhaps not, but if we begin to examine how that meat came to be on the plate, the social, cultural and ideological associations of that cow, we begin to understand the complexity of both medium and message. A piece of steak on my plate makes me happy. A vegetarian friend from India might disagree and even find that that serving her a steak was very insensitive.

Takeaway: Getting the message right involves understanding that message in order to direct it to your audience accordingly.

If we revisit the student who only wants technique, while he might become extremely adept at the rendering of an idea, without an understanding of the medium, how is he to have greater control over how that idea is perceived? Ultimately, his creativity is limited and his perspective narrowed, and the teacher has done her student a disservice without challenging him, particularly in a scholastic environment, to think in liberal, creative and ultimately innovative terms.

For many years, web pundits including myself have promoted the idea of separation as a core concept within creating effective front-end media for the Web. By this, we’ve meant literal separation of the technologies and documents: Markup for content; CSS for presentation; DOM Scripting for behavior. While the message of separation was an important part of understanding and teaching best practices for manageable, scalable sites, that separation is really just a separation of pieces, not of entire disciplines.

For in fact, the medium of the Web is an integrated one. That means each part of the desired message must be supported by the media silos within a given site. The visual designer must study the color, space, shape and placement of visual objects (including type) into a meaningful expression. The underlying markup is ideally written as semantically as possible, promote the meaning of the content it describes. Any interaction and functionality must make the process of the medium support, not take away from, the meaning of the site or Web application. 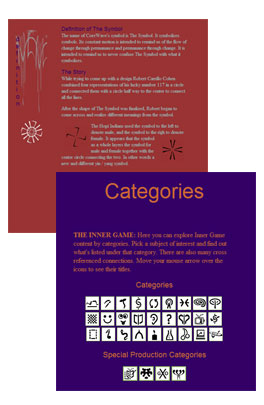 Figure 2 shows two screenshots of CoreWave’s historic ‘Glass Bead Game.’ Fashioned after Herman Hesse’s novel of the same name, the game was an exploration of how ideas are connected to other ideas via multiple forms of media. It was created for the Web in 1996 using server-side randomization with .htmlx files in order to allow players to see how random associations are in fact not random at all.

Takeaway: We can use the medium itself to explore creative ideas, to link us from one idea to the next, and to help us better express those ideas to our audiences.

Since our medium involves computers and human interaction, it does us well to look to foundations of computers and reason. Not long ago I was chatting with Jared Spool on IM about this and that, and he asked me ‘So how do you feel about that?’ This caused me no end of laughter and I instantly quipped back ‘It’s okay by me ELIZA.’ We both enjoyed the joke, but then I tried to share it with another dare I say younger colleague, and the reference was lost.

Raise your hand if you got the reference! Some of you will, but many people who come to the Web medium do not get the benefit of such historical references because we are not formally educated in them. Joseph Weizenbaum created the ELIZA program, which emulates a Rogerian Therapist, in 1966. It was an early study of computers and natural human language. I was a little over 2 years old, how about you?

There are fortunately a number of ELIZA emulators on the Web. I found one at http://www.chayden.net/eliza/Eliza.html that actually contains the source code (in Java) that makes up the ELIZA script.

Figure 3 shows a screen shot of the interaction. ELIZA first welcomes me, says ‘Hello, How do you do. Please state your problem’ and we continue in a short loop of conversation, the computer using cues from my answers to create new questions and leading fragments of conversation.

Albeit a very limited demonstration of how humans could interact with a computer in 1966, it’s amusing to play with now and compare it to something as richly interactive as the Microsoft Surface (Figure 4). Here, we see clear Lucite blocks that display projected video. Each side of the block has a different view of the video, so not only does one have to match up the images as they are moving, but do so in the proper directionality.

Takeway: the better we know our environment, the more we can alter it to emulate, expand and even supersede our message.

Since most of us at least have a few days off for the holidays now that Christmas is upon us, now’s a perfect time to reflect on ones’ environment and examine the messages within it. Convince your spouse to find you a few audio books for stocking stuffers. Find interactive games to play with your kids and observe them, and yourself, during the interaction. Pour a nice egg-nog and sit down with a copy of Marshall McLuhan’s ‘The Medium is the Massage.’ Leverage that holiday cheer and here’s to a prosperous, interactive new year.