The CLI is a daunting tool. It’s quick, powerful, but it’s also incredibly easy to screw things up in – either with a mistyped command, or a correctly typed command used at the wrong moment. This puts a lot of people off using it, but it doesn’t have to be this way.

If you’ve ever interacted with Slack’s Slackbot to set a reminder or ask a question, you’re basically using a command line interface, but it feels more like having a conversation. (My favourite Slack app is Lunch Train which helps with the thankless task of herding colleagues to a particular lunch venue on time.)

Same goes with voice-operated assistants like Alexa, Siri and Google Home. There are even games, like Lifeline, where you interact with a stranded astronaut via pseudo SMS, and KOMRAD where you chat with a Soviet AI.

I’m not aiming to build an AI here – my aspirations are a little more down to earth. What I’d like is to make the CLI a friendlier, more forgiving, and more intuitive tool for new or reluctant users. I want to teach it to talk back.

Interactive command lines in the wild

If you’ve used dev tools in the command line, you’ve probably already used an interactive prompt – something that asks you questions and responds based on your answers. Here are some examples:

If you have Yeoman globally installed, running yo will start a command prompt.

The prompt asks you what you’d like to do, and gives you options with how to proceed. Seasoned users will run specific commands for these options rather than go through this prompt, but it’s a nice way to start someone off with using the tool.

If you’re a Node.js developer, you’re probably familiar with typing npm init to initialise a project. This brings up prompts that will populate a package.json manifest file for that project.

The alternative would be to expect the user to craft their own package.json, which is more error-prone since it’s in JSON format, so something as trivial as an extraneous comma can throw an error. 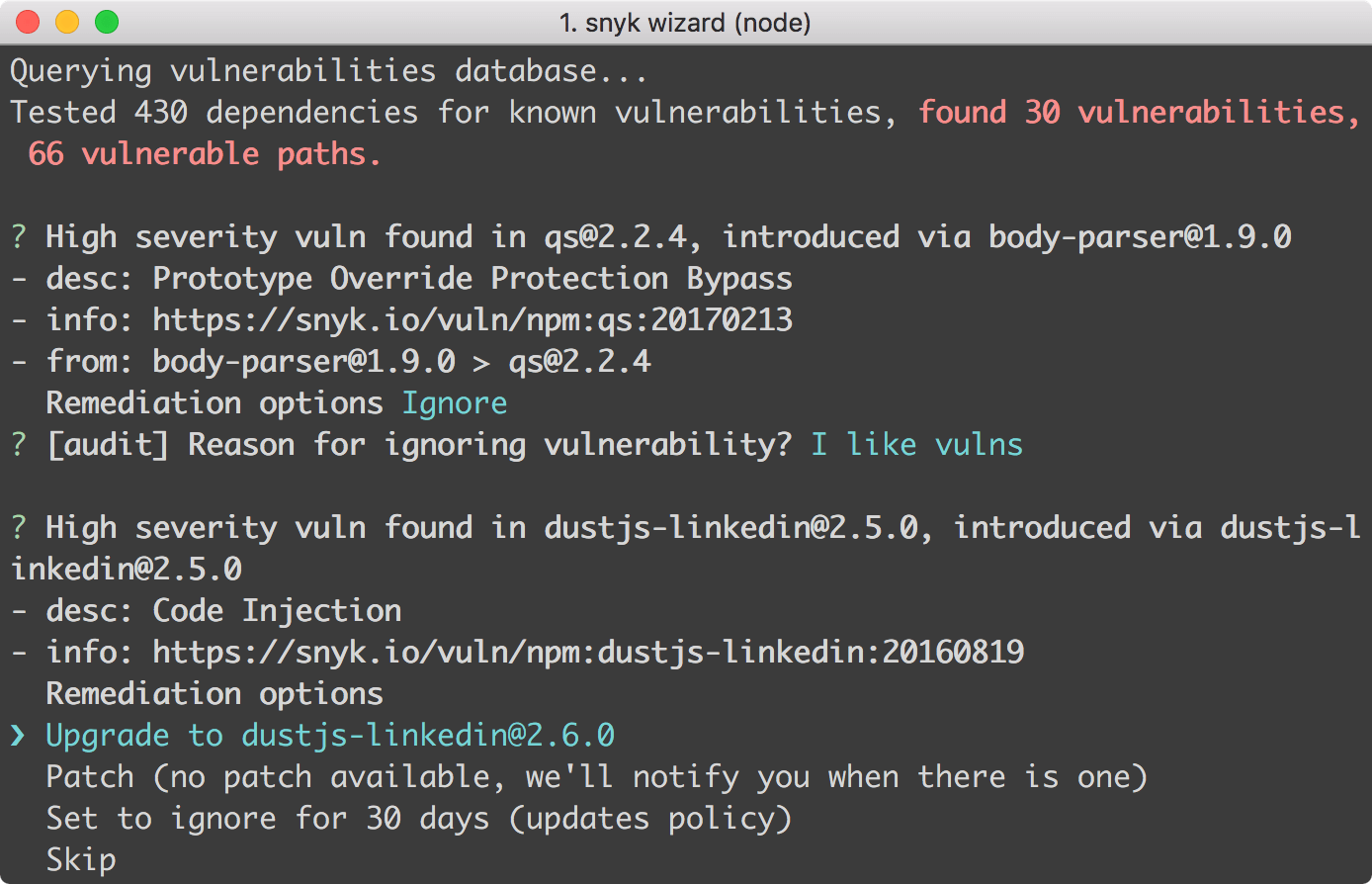 These decisions get mapped to the manifest and a .snyk file, and committed into the repo so that the settings are the same for everyone who uses that project.

I work at Snyk, and running the wizard is what made me think about building my own personal assistant in the command line to help me with some boring, repetitive tasks.

Something I do a lot is add bookmarks to styleguides.io – I pull down the entire repo, copy and paste a template YAML file, and edit to contents. Sometimes I get it wrong and break the site. So I’ve been putting together a tool to help me add bookmarks.

It’s called bookmarkbot – it’s a personal assistant squirrel called Mark who will collect and bury your bookmarks for safekeeping.* 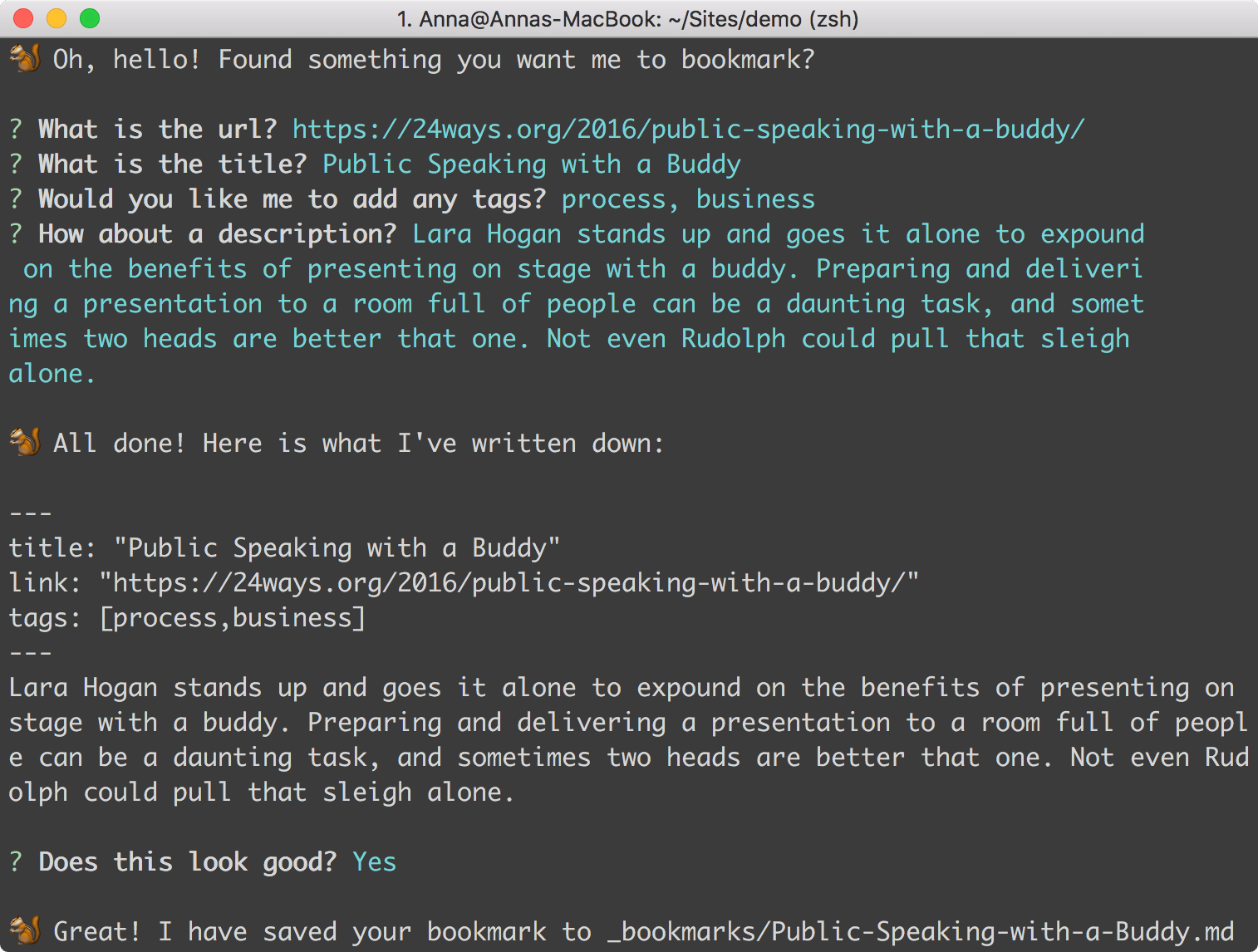 *Fortunately, this metaphor also gives me a charming excuse for any situation where bookmarks sometimes get lost – it’s not my poorly-written code, honest, it’s just being realistic because sometimes squirrels forget where they buried things!

When you run bookmarkbot, it will ask you for some information, and save that information as a Markdown file in YAML format.

For this demo, I’m going to use a Node.js package called inquirer, which is a well supported tool for creating command line prompts. I like it because it has a bunch of different question types; from input, which asks for some text back, confirm which expects a yes/no response, or a list which gives you a set of options to choose from. You can even nest questions, Choose Your Own Adventure style.

Bear in mind that this is a really simplified walkthrough. It doesn’t have any error states, and it doesn’t handle the situation where we save a file with the same name. But it gets you in a good place to start building out your tool.

Create a new folder wherever you keep your projects, and give it an awesome name (I’ve called mine bookmarks and put it in the Sites directory because I’m unimaginative). Now cd to that directory.

Let’s use that example I gave earlier, the trusty npm init.

Pop in the information you’d like to provide, or hit ENTER to skip through and save the defaults. Your directory should now have a package.json file in it. Now let’s install some of the dependencies we’ll need.

Next, add the following snippet to your package.json to tell it to run this file when you run npm start.

That index.js file doesn’t exist yet, so let’s create it in the root of our folder, and add the following:

This is just some barebones where we’re including the inquirer package we installed earlier. I’ve stored the questions in a variable, and the askQuestions function will prompt the user for their name, and then print “Hello <your name>” in the console.

Enough setup, let’s see some magic. Save the file, go back to the command line and run npm start.

At the moment, we’re just saving a name to a file, which isn’t really achieving our goal of saving bookmarks. We don’t want our tool to forget our information every time we talk to it – we need to save it somewhere. So I’m going to add a little function to write the output to a file.

Saving to a file

Create a folder in your project’s directory called _bookmarks. This is where the bookmarks will be saved.

I’ve replaced my questions array, and instead of asking for a name, I’ve extended out the questions, asking to be provided with a link and title (as a regular input type), a list of tags (using inquirer’s checkbox type), and finally a description, again, using the input type.

So this is how my code looks now:

The output is formatted into YAML metadata as a Markdown file, which will allow us to turn it into a static HTML file using a build tool later. Run npm start again and have a look at the file it outputs.

Before the user makes critical changes, it’s good to verify those changes first. We’re going to add a confirmation step to our tool, before writing the file. More seasoned CLI users may favour speed over a “hey, can you wait a sec and just check this is all ok” step, but I always think it’s worth adding one so you can occasionally save someone’s butt.

So, underneath our questions array, let’s add a confirmation array.

As we’re adding the confirm step before the file gets written, we’ll need to add the following inside the askQuestions function:

Now run npm start and give it a go!

Typing y will write the file, and n will take you back to the start. Ideally, I’d store the answers already given as defaults so the user doesn’t have to start from scratch, but I want to keep this demo simple.

Now that your bookmarking tool is successfully saving formatted Markdown files to a folder, the next step is to serve those files in a way that lets you share them online. The easiest way to do this is to use a static-site generator to convert your YAML files into HTML, and pop them all on one page. Now, you’ve got a few options here and I don’t want to force you down any particular path, as there are plenty out there – it’s just a case of using the one you’re most comfortable with.

I personally favour Jekyll because of its tight integration with GitHub Pages – I don’t want to mess around with hosting and deployment, so it’s really handy to have my bookmarks publish themselves on my site as soon as I commit and push them using Git.

I’ll give you a very brief run-through of how I’m doing this with bookmarkbot, but I recommend you read my Get Started With GitHub Pages (Plus Bonus Jekyll) guide if you’re unfamiliar with them, because I’ll be glossing over some bits that are already covered in there.

Setting up a build tool

If you haven’t already, install Jekyll and Bundler globally through RubyGems. Jekyll is our static-site generator, and Bundler is what we use to install Ruby dependencies.

In my project folder, I’m going to run the following which will install the Jekyll files we’ll need to build our listing page. I’m using --force, otherwise it will complain that the directory isn’t empty.

If you check your project folder, you’ll see a bunch of new files. Now run the following to start the server:

This will build a new directory called _site. This is where your static HTML files have been generated. Don’t touch anything in this folder because it will get overwritten the next time you build.

Now that serve is running, go to http://127.0.0.1:4000/ and you’ll see the default Jekyll page and know that things are set up right. Now, instead, we want to see our list of bookmarks that are saved in the _bookmarks directory (make sure you’ve got a few saved). So let’s get that set up next.

This will make Jekyll aware of our _bookmarks folder so that we can call it later. Next, create a new directory and file at _layouts/home.html and paste in the following.

Restart Jekyll for your config changes to kick in, and go to the url it provides you (probably http://127.0.0.1:4000/bookmarks, unless you gave something different as your baseurl). 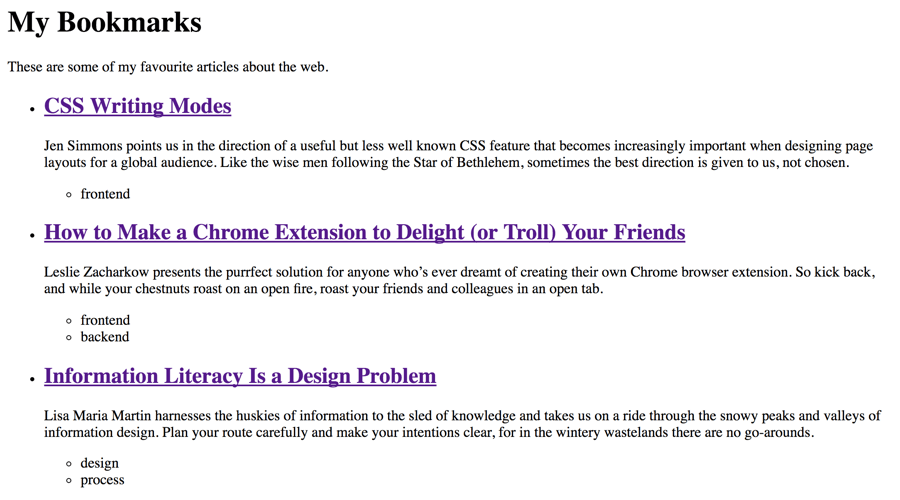 It’s a decent start – there’s a lot more we can do in this area but now we’ve got a nice list of all our bookmarks, let’s get it online!

If you want to use GitHub Pages to host your files, your first step is to push your project to GitHub. Go to your repository and click “settings”. Scroll down to the section labelled “GitHub Pages”, and from here you can enable it. Select your master branch, and it will provide you with a url to view your published pages. 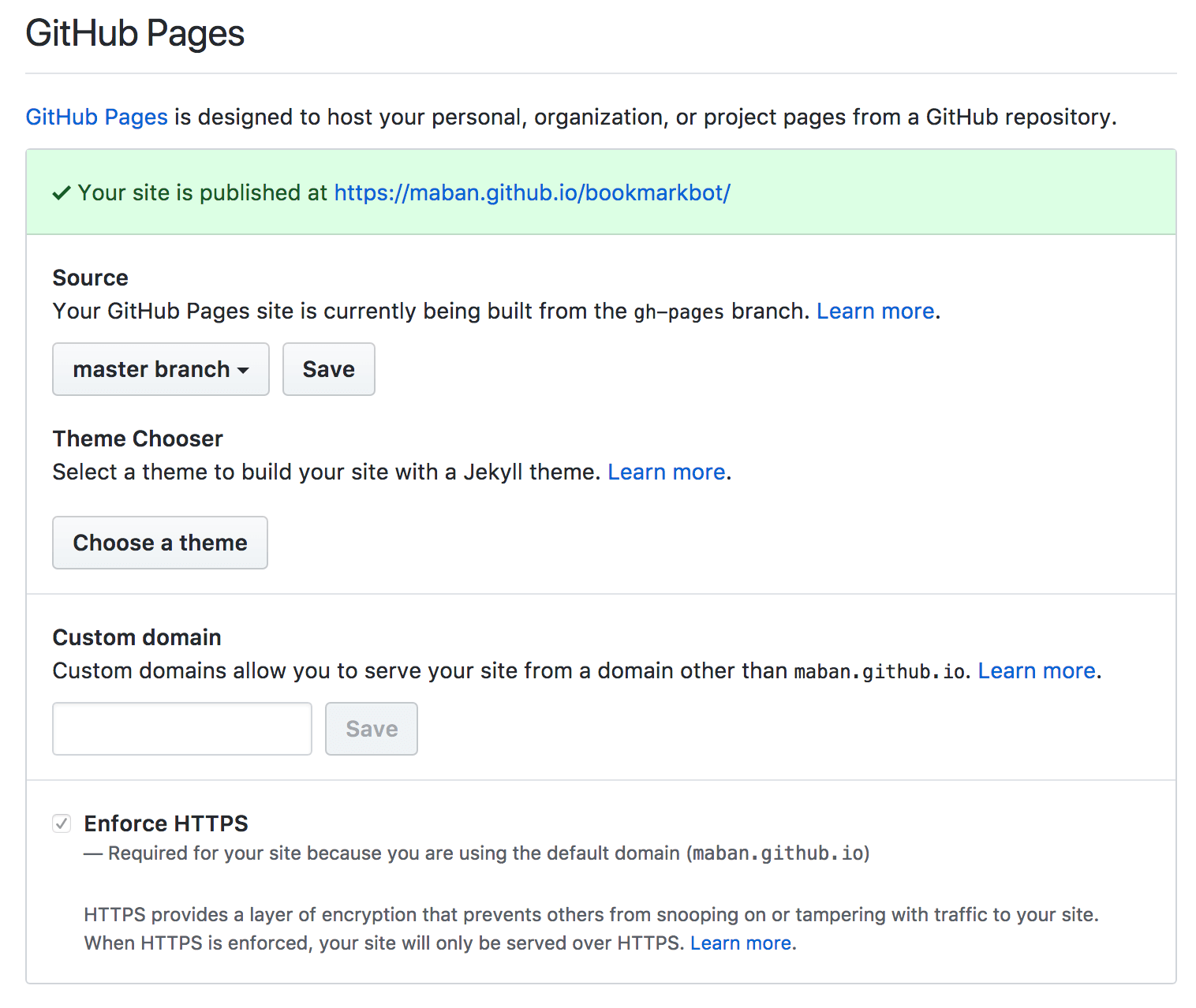 Now that you’ve got a framework in place for publishing bookmarks, you can really go to town on your listing page and make it your own. First thing you’ll probably want to do is add some CSS, then when you’ve added a bunch of bookmarks, you’ll probably want to have some filtering in place for the tags, perhaps extend the types of questions that you ask to include an image (if you’re feeling extra-fancy, you could just ask for a url and pull in metadata from the site itself). Maybe you’ve got an idea that doesn’t involve bookmarks at all.

You could use what you’ve learnt to build a place where you can share quotes, a list of your favourite restaurants, or even Christmas gift ideas.

Here’s one I made earlier 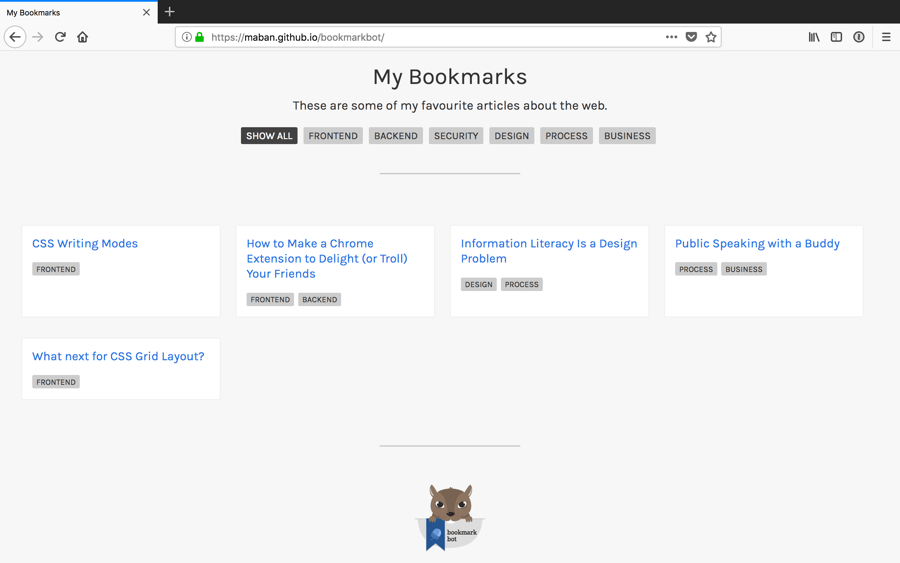 My demo, bookmarkbot, is on GitHub, and I’ve reused a lot of the code from styleguides.io. Feel free to grab bits of code from there, and do share what you end up making!

Anna Debenham lives in London and is a Product Manager at Snyk.

She’s the author of Front-end Style Guides, and when she’s not playing on them, she’s testing as many game console browsers as she can get her hands on. 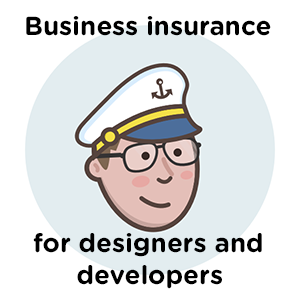 Be a confident freelancer. With Jack protects your business so you're free to focus on the important stuff—winning that next project and doing great work.