How many times have you seen a colour combination that just worked, a match so perfect that it just seems obvious?

Now, how many times do you come up with those in your own work? A perfect palette looks easy when it’s done right, but it’s often maddeningly difficult and time-consuming to accomplish.

Choosing effective colour schemes will always be more art than science, but there are things you can do that will make coming up with that oh-so-smooth palette just a little a bit easier. A simple trick that can lead to incredibly gratifying results lies in finding a strong photograph and sampling out particularly harmonious colours.

Not all photos are created equal. You certainly want to start with imagery that fits the eventual tone you’re attempting to create. A well-lit photo of flowers might lead to a poor colour scheme for a funeral parlour’s web site, for example. It’s worth thinking about what you’re trying to say in advance, and finding a photo that lends itself to your message.

As a general rule of thumb, photos that have a lot of neutral or de-saturated tones with one or two strong colours make for the best palette; bright and multi-coloured photos are harder to derive pleasing results from. Let’s start with a relatively neutral image.

In the above example, I’ve surrounded the photo with three different background colours directly sampled from the photo itself. Moving from left to right, you can see how each of the sampled colours is from an area of increasingly smaller coverage within the photo, and yet there’s still a strong harmony between the photo and the background image. I don’t really need to pick the big obvious colours from the photo to create that match, I can easily concentrate on more interesting colours that might work better for what I intend. 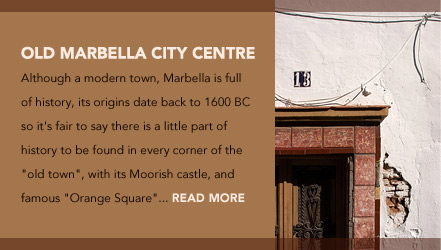 In this mini-layout, I’ve re-used the same tan colour from the previous middle image as a background, and sampled out a nicely matching colour for the top and bottom overlays, as well as the two different text colours. Because these colours all fall within a narrow range, the overall balance is harmonious.

What if I want to try something a little more daring? I have a photo of stacked chairs of all different colours, and I’d like to use a few more of those. No problem, provided I watch my colour contrast: 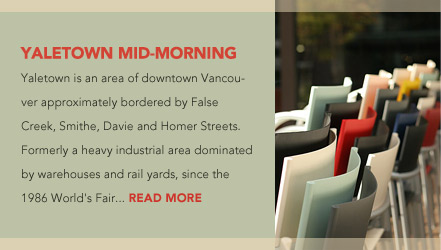 Though it uses varying shades of red, green, and yellow, this palette actually works because the values are even, and the colours muted. Placing red on top of green is usually a hideous combination of death, but if the green is drab enough and the red contrasts well enough, the result can actually be quite pleasing. I’ve chosen red as my loudest colour in this palette, and left green and yellow to play the quiet supporting roles.

Obviously, there are no hard and fast rules here. You might not want to sample absolutely every colour in your scheme from a photo. There are times where you’ll need a variation that’s just a little bit lighter, or a blue that’s not in the photo. You might decide to start from a photo base and tweak, or add in colours of your own. That’s okay too.

I’ll leave you with a final trick I’ve been using lately, a way to bring a bit more of a formula into the equation and save some steps.

Starting with the same base palette I sampled from the chairs, in the above image I’ve added a pair of overlaying squares that produce tonal variations of each primary. The lighter variation is simply a solid white square set to 40% opacity, the darker one is a black square at 20%. That gives me a highlight and shadow for each colour, which would prove handy if I had to adapt this colour scheme to a larger layout.

I could add a few more squares of varying opacities, or adjust the layer blending modes for different effects, but as this looks like a great place to end, I’ll leave that up to your experimental whims. Happy colouring!

Dave Shea is the Founder of Bright Creative, and co-organizer of Web Directions North. He blogs sometimes at Mezzoblue and Flickrs a bit more often than that. Oh, and there’s other stuff too.