Traditionally, bitmap formats such as PNG have been the standard way of delivering iconography on websites. They’re quick and easy, and it also ensures they’re as pixel crisp as possible. Bitmaps have two drawbacks, however: multiple HTTP requests, affecting the page’s loading performance; and a lack of scalability, noticeable when the page is zoomed or viewed on a screen with a high pixel density, such as the iPhone 4 and 4S.

The requests problem is normally solved by using CSS sprites, combining the icon set into one (physically) large image file and showing the relevant portion via background-position. While this works well, it can get a bit fiddly to specify all the positions. In particular, scalability is still an issue. A vector-based format such as SVG sounds ideal to solve this, but browser support is still patchy. 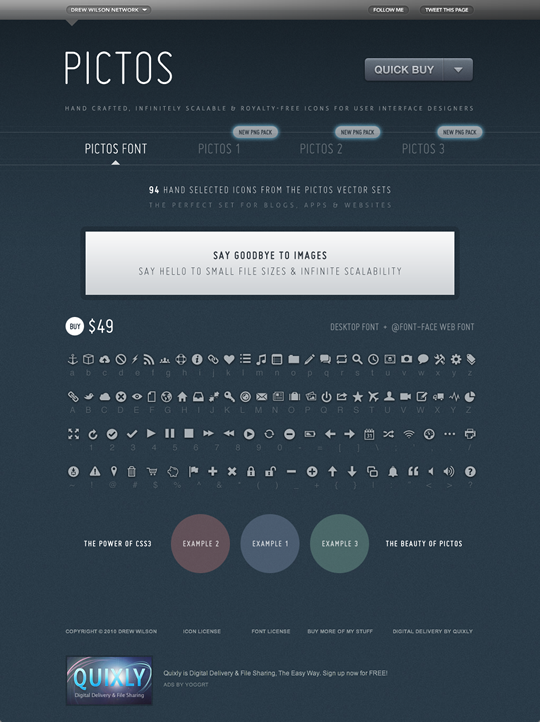 The rise and adoption of web fonts have given us another alternative. By their very nature, they’re not only scalable, but resolution-independent too. No need to specify higher resolution graphics for high resolution screens!

That’s not all though:

As with all formats though, it’s not without its disadvantages:

The main complaint about using fonts for icons is that it can mean adding a meaningless character to our markup. The good news is that we can overcome this by using one of two methods – CSS generated content or the data-icon attribute – in combination with the :before and :after pseudo-selectors, to keep our markup minimal and meaningful.

This rather complicated looking set of rules is (at the time of writing) the most bulletproof way of ensuring as many browsers as possible load the font we want. We’ll now use the content property applied to the :before pseudo-class selector to generate our icon. Once again, we’ll use those multiple class attribute values to set common icon styles, then specific styles for .basket. This helps us avoid repeating styles:

What does the :before pseudo-class do? It generates the dollar character in a browser, even when it’s not present in the markup. Using the generated content approach means our markup stays simple, but we’ll need a new line of CSS, defining what letter to apply to each class attribute for every icon we add.

data-icon is a new alternative approach that uses the HTML5 data- attribute in combination with CSS attribute selectors. This new attribute lets us add our own metadata to elements, as long as its prefixed by data- and doesn’t contain any uppercase letters. In this case, we want to use it to provide the letter value for the icon. Look closely at this markup and you’ll see the data-icon attribute.

We could add others, in fact as many as we like.

Then, we need just one CSS attribute selector to style all our icons in one go:

By placing our custom attribute data-icon in the selector in this way, we can enable CSS to read the value of that attribute and display it before the element (in this case, the anchor tag). It saves writing a lot of CSS rules. I can imagine that some may not like the extra attribute, but it does keep it out of the actual content – generated or not.

This could be used for all manner of tasks, including a media player and large simple illustrations. See the demo for live examples. Go ahead and zoom the page, and the icons will be crisp, with the exception of the examples that use -webkit-background-clip: text as mentioned earlier.

Finally, it’s worth pointing out that with both generated content and the data-icon method, the letter will be announced to people using screen readers. For example, with the shopping basket icon above, the reader will say “dollar sign view basket”. As accessibility issues go, it’s not exactly the worst, but could be confusing. You would need to decide whether this method is appropriate for the audience. Despite the disadvantages, icon fonts have huge potential.