During the recent US elections, Twitter decided to add an ‘election bar’ as part of their site design. You could close it if it annoyed you, but the action wasn’t persistent and the bar would always come back like a bad penny.

The solution to common browsing problems like this is CSS. ‘User styling’ (or the creepy ‘skinning’) is the creation of CSS rules to customise and personalise a particular domain. Aside from hiding adverts and other annoyances, there are many reasons for taking the time and effort to do it:

Hopefully you’re now asking “But how? HOW?!”. The process of creating a site skin is roughly as follows:

So let’s get stuck in…

Let’s start small with Multimap.com. Look at that big header – it takes up an awful lot of screen space doesn’t it? 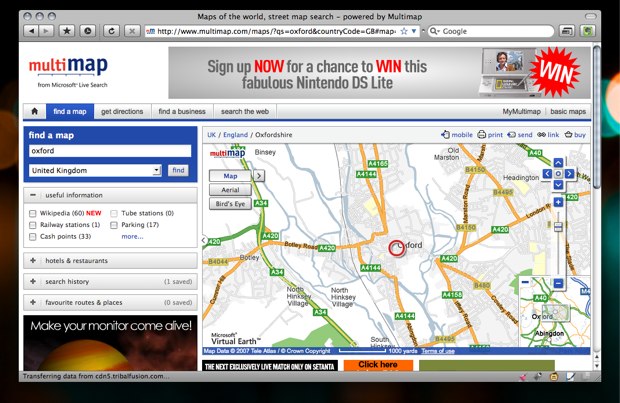 No matter, we can fix it.

Now we need to find out where that big assed header is in the DOM, and make overriding CSS rules. The best tool I’ve found yet is the Mac OS X app, CSS Edit. It utilises a slick ‘override stylesheets’ function and DOM Inspector. Rather than give you all the usual DOM inspection tools, CSS Edit’s is solely concerned with style. Go into ‘X-Ray’ mode, click an element, and look at the inspector window to see every style rule governing it. Click the selector to be taken to where it lives in the CSS. It really is a user styling dream app. 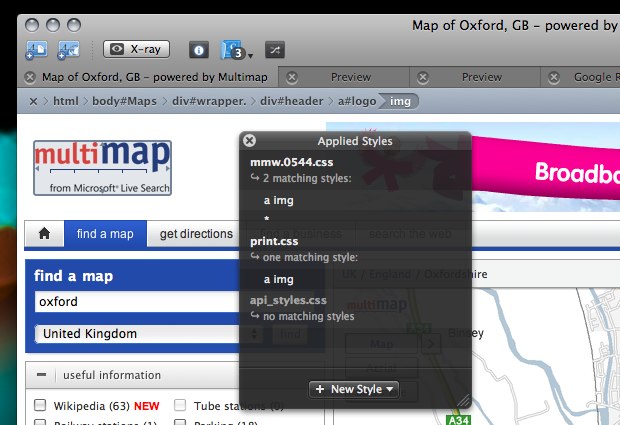 Having said all that, you can achieve all this with free, cross platform tools – namely Firefox with the Firebug and Stylish extensions. We’ll be using them for these examples, so make sure you have them installed if you want to follow along. 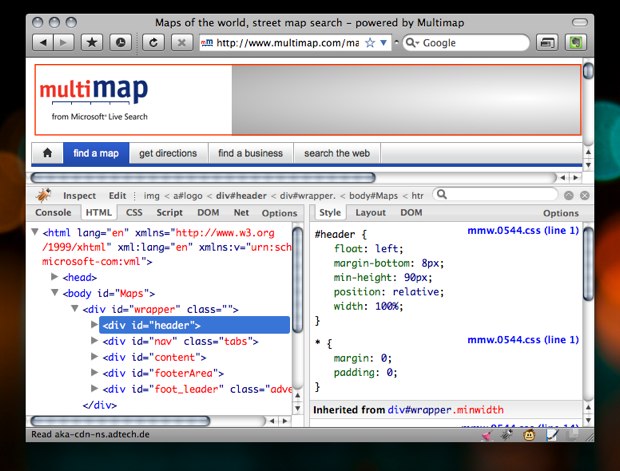 Using Firebug, we can see that the page is very helpfully marked up, and that whole top area is simply a div with an ID of header.

When you installed Stylish, it added a page and brush icon to your status bar. Click on that, and choose Write Style > for Multimap.com. The other options allow you to only create a style for a particular part of a website or URL, but we want this to apply to the whole of Multimap:

The ‘Add Style’ window then pops up, with the @-moz-document query at the top:

All you need to do is add the CSS to hide the header, in between the curly brackets. 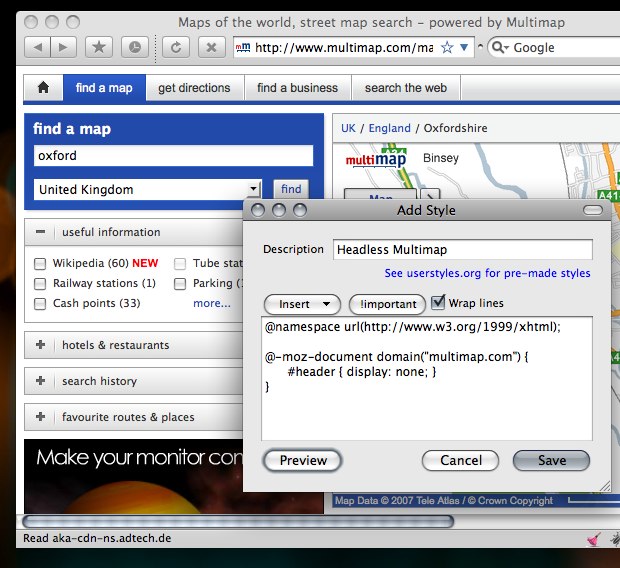 A click of the preview button shows us that it’s worked! Now the map appears further up the page. The ethics of hiding adverts is a discussion for another time, but let’s face it, when did you last whoop at the sight of a banner?

If we’re happy with our modifications, all we need to do is give it a name and save. Whenever you visit Multimap.com, the style will be available. Stylish also allows you to toggle a style on/off via the status bar menu. If you feel you want to share this style with the world, then userstyles.org is the place to do it. It’s a grand repository of customisations that Stylish connects with. Whenever you visit a site, you can see if anyone else has written a style for it, again, via the status bar menu “Find Styles for this Page”. Selecting this with “BBC News” shows that there are plenty of options, ranging from small layout tweaks to redesigns: 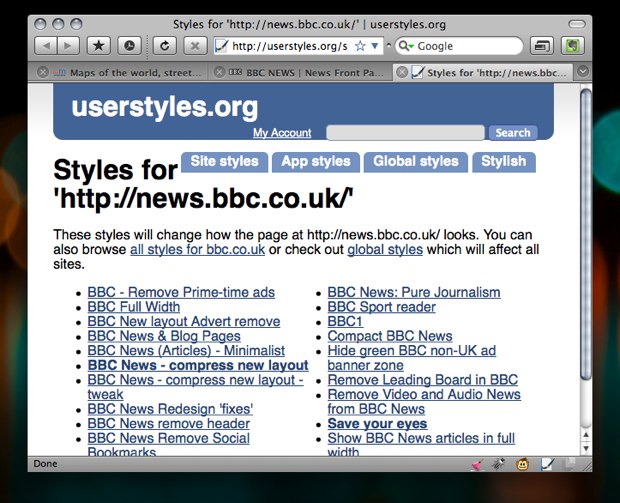 What’s more, whenever a style is updated, Stylish will notify you, and offer a one-click process to update it. This does only work in Firefox and Flock, so I’ll cover ways of applying site styles to other browsers later.

In the Multimap example there wasn’t a display specified on that element, but it isn’t always going to be that easy. You may have spent most of your CSS life being a good designer and not resorting to adding !important to give your rule priority. There’s no way to avoid this in user styling – if you’re overriding an existing rule it’s a necessity! Be prepared to be typing !important a lot.

The Universal Selector is a particularly useful way to start a style. For example, if we want to make Flickr use Helvetica before Arial (as they should’ve done!), we can cover all occurrences with just one rule:

You can also use it to select ‘everything within an element’, by placing it after the element name:

If you’re changing something a little more complex, such as Google Reader, then at some point you’ll probably want to change an <img>. The technique for replacing an image involves:

The old image is then pushed out of the way and hidden from view, allowing the replacement in the background to be revealed. Targeting the image may require using an attribute selector:

Woah boy! What was all that gubbins in the background-image? It was a Data URI, and you can create these easily with Hixie’s online tool. It’s simply the image translated into text so that it can be embedded in the CSS, cutting down on the number of http requests. It’s also a necessity with Mozilla browsers, as they don’t allow user CSS to reference images stored locally. Converting images to URI’s avoids this, as well as making a style easily portable – no images folder to pass around.

Don’t forget all your other CSS techniques at your disposal: inserting your own content with :before and :after pseudo classes, make elements semi-transparent with opacity and round box corners without hacking . You can have fun, and for once, enjoy the freedom of not worrying about IE!

Instead of using the Stylish extension, you can add rules to the userContent.css file, or use @import in that file to load a separate stylesheet. You can find this is in /Library/Application Support/Camino/chrome/ on OS X, or C/Program Files/Mozilla Firefox/Chrome on Windows. This is only way to apply user styles in Camino, but what about other browsers?

Both allow you to specify a custom CSS file as part of the site’s preferences. Opera also allows custom javascript, using the same syntax as Greasemonkey scripts (more on that below)

There are a few options here: the PithHelmet and SafariStand haxies both allow custom stylesheets, or alternatively, a Greasemonkey style user script can employed via GreaseKit. The latter is my favoured solution on my Helvetireader theme, as it can allow for more prescriptive domain rules, just like the Mozilla @-moz-document method. User scripts are also the solution supported by the widest range of browsers.

Hopefully I’ve given you enough information for you to be able start making your own styles. If you want to go straight in and tackle the ‘Holy Grail’, then off with you to GMail – I get more requests to theme that than anything else!

If you’re a site author and want to encourage this sort of tom foolery, a good way is to provide a unique class or ID name with the body tag:

This makes it very easy to write rules that only apply to that particular site. If you wanted to use Safari without any of the haxies mentioned above, this method means you can include rules in a general CSS file (chosen via Preferences > Advanced > Stylesheet) without affecting other sites.

One final revelation on user styling – it’s not just for web sites. You can tweak the UI of Firefox itself with the userChrome.css. You’ll need to use the in-built DOM Inspector instead of Firebug to inspect the window chrome, instead of a page. Great if you want to make small tweaks (changing the size of tab text for example) without creating a full blown theme.