Hello, 24 ways. I’m Ashley and I sell property insurance. I’m interrupting your Christmas countdown with an article about rental property software and a guy, Pete, who selflessly encouraged me to build my first web app. It doesn’t sound at all festive, or — considering I’ve used both “insurance” and “rental property” — interesting, but do stick with me. There’s eggnog at the end.

I run a property insurance business, Brokers Direct. It’s a small operation, but well established. We’ve been selling landlord insurance on the web for over thirteen years, for twelve of which we have provided our clients with third-party software for managing their rental property portfolios. Free. Of. Charge.

It sounds like a sweet deal for our customers, but it isn’t. At least, not any more. The third-party software is victim to years of neglect by its vendor. Its questionable interface, garish visuals and, ahem, clip art icons have suffered from a lack of updates. While it was never a contender for software of the year, I’ve steadily grown too embarrassed to associate my business with it.

I wanted to offer my customers a simple, clean and lightweight alternative. In an industry that’s dominated by dated and bloated software, it seemed only logical that I should build my own rental property tool.

Learning a programming language is daunting, the source of my frustration stemming from a non-programming background. Generally, tutorials assume a degree of familiarity with programming, whether it be tools, conventions or basic skills. I had none and, at the time, there was nothing on the web really geared towards a novice. I reached the point where I genuinely thought I was just not cut out for coding. Surrendering to my feelings of self-doubt and frustration, I sourced a local Rails developer, Pete, to build it for me.

Pete brought a pack of index cards to our meeting. Index cards that would represent each feature the rental property software would launch with.

“OK,” he began. “We’ll need a user model, tenant model, authentication, tenant and property relationships…” A dozen index cards with a dozen features lined the coffee table in a grid-like format. Logical, comprehensible, achievable. Seeing the app laid out in a digestible manner made it seem surmountable. Maybe I could do this.

“I’ve been trying to learn Rails…”, I piped up.

I don’t know why I said it. I was fully prepared to hire Pete to do the hard work for me. But Pete, unprompted, gathered the index cards and neatly stacked them together, coasting them across the table towards me. “You should build this”.

Pete, a full-time freelance developer at the time, was turning down a paying job in favour of encouraging me to learn to code. Looking back, I didn’t realise how significant this moment was.

That evening, I took Pete’s index cards home to make a start on my app, slowly evolving each of the cards into a working feature. Building the app solo, I turned to Stack Overflow to solve the inevitable coding hurdles I encountered, as well as calling on a supportive Rails community. Whether they provided direct solutions to my programming woes, or simply planted a seed on how to solve a problem, I kept coding. Many months later, and after several more doubtful moments, Lodger was born.

“I haven’t quite grasped Rails routing. I should tackle another tutorial.”

Making excuses — or procrastination — is something we are all guilty of. I was waiting for a programming book that would magically deposit a grasp of the entire Ruby syntax in my head. I kept buying books thinking each one would be the one where it all clicked. I now have a bookshelf full of Ruby material, all of which I’ve barely read, and none of which got me any closer to launching my web app. Put simply, there’s no magic formula.

Whatever it is you want to build, break it down into digestible chunks. Taking Pete’s method as an example, having an index card represent an individual feature helped me tremendously. Tackle one at a time. Even if each feature takes you a month to build, and you have eight features to launch with, after eight months you’ll have your MVP. Remember, if you do nothing each day, it adds up to nothing.

Have a tangible product to build

I have a wonderful habit of writing down personal notes, usually to express my feelings at the time or to log an idea, only to uncover them months or years down the line, long after I forgot I had written them. I made a timely discovery while writing this article, discovering this gem while flicking through a battered Moleskine:

“I don’t seem to be making good progress with learning Rails, but development still excites me. I should maybe stop doing tutorials and work towards building a specific app.”

Having a real product to work on, like I did with Lodger, means you have something tangible to apply the techniques you are learning. I found this prevented me from flitting aimlessly between tutorials and books, which is an easy area to accidentally remain in.

If possible, team up with a designer and create something together. Designers are great at presenting features in a way you’d never have considered. You will learn a lot from making their designs come to life.

Your homework for the holiday

Despite having a web app under my belt, I am not a programmer. I tinker with code, piecing enough bits of it together to make something functional. And that’s OK! I’m not excusing sloppiness, but if we aimed for perfection every time, we’d never execute any of our ideas.

As the holidays approach and you’ve exhausted yet another viewing of The Muppet Christmas Carol (or is that just my guilty pleasure at Christmas?), you may have time on your hands. Time to explore an idea you’ve been sitting on, but — plagued with procrastination and doubt — have yet to bring to life. This holiday, I am here to say to you what Pete said to me.

You should build this.

You don’t need to be the next Mark Zuckerberg or Larry Page. You just have to learn enough to get it done.

PS: I lied about the eggnogg, but try capturing somebody’s attention when you tell them you sell property insurance!

An unusual combination of insurer and photographer, Ashley’s big girl’s job is running insurance broker Brokers Direct. She has also been known to photograph weddings under the Girl With A Camera alias. Ashley reserves what little leisure time she has for Xbox, weightlifting and convincing people that working in insurance isn’t as mundane as it sounds.

Ashley tweets as @iamashley and prefers dogs over cats. 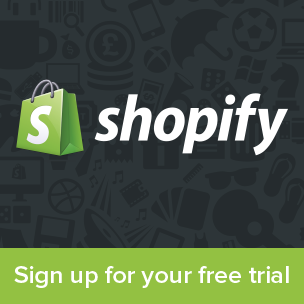 The fully customizable ecommerce platform loved by designers around the world.