Despite the fact that the Web has been international in scope from its inception, the predominant mass of Web sites are written in English or another left-to-right language. Sites are typically designed visually for Western culture, and rely on an enormous body of practices for usability, information architecture and interaction design that are by and large centric to the Western world.

There are certainly many reasons this is true, but as more and more Web sites realize the benefits of bringing their products and services to diverse, global markets, the more demand there will be on Web designers and developers to understand how to put the World into World Wide Web.

According to the W3C, Internationalization is:

“…the design and development of a product, application or document content that enables easy localization for target audiences that vary in culture, region, or language.”

Many Web designers and developers have at least heard, if not read, about Internationalization. We understand that the Web is in fact worldwide, but many of us never have the opportunity to work with Internationalization. Or, when we do, think of it in purely technical terms, such as “which character set do I use?”

At first glance, it might seem to many that Internationalization is the act of making Web sites available to international audiences. And while that is in fact true, this isn’t done by broad-stroking techniques and technologies. Instead, it involves a far more narrow understanding of geographical, cultural and linguistic differences in specific areas of the world. This is referred to as localization and is the act of making a Web site make sense in the context of the region, culture and language(s) the people using the site are most familiar with.

According to the W3C, Localization is the:

…adaptation of a product, application or document content to meet the language, cultural and other requirements of a specific target market (a “locale”).

So here’s where we get down to thinking about the more sociological and anthropological concerns. Some of the primary localization issues are:

As you can see, the act of localization is one that can have profound impact on the success of a business or organization as it seeks to become available to more and more people across the globe.

Rethinking Design in the Context of Culture

While well-educated designers and those individuals working specifically for companies that do a lot of localization understand these nuances, most of us don’t get exposed to these ideas. Yet, we begin to see how necessary it becomes to have an awareness of not just the technical aspects of Internationalization, but the socio-cultural ones within localization.

What’s more, the bulk of information we have when it comes to designing sites typically comes from studies and work done on sites built in English and promoted to Western culture at large. We’re making a critical mistake by not including diverse languages and cultural issues within our usability and information architecture studies.

Consider the following design from the BBC:

In this case, we’re dealing with English, which is read left to right. We are also dealing with U.K. cultural norms. Notice the following:

Now look at this design, which is the Arabic version of the BBC News, read right to left, and dealing with cultural norms within the Arabic-speaking world. 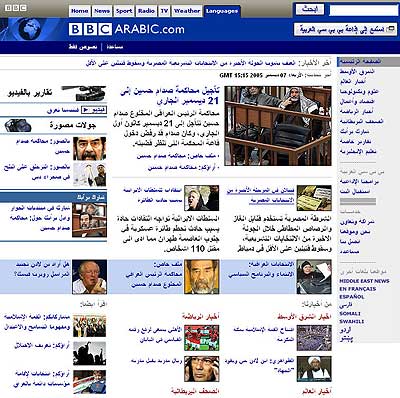 Admittedly, some choices here are more obvious than others in terms of why they were made. But one thing that stands out is that the placement of search is the same for both versions. Is this the result of a specific localization decision, or based on what we believe about usability at large? This is exactly the kind of question that designers working on localization have to seek answers to, instead of relying on popular best practices and belief systems that exist for English-only Web sites.

It’s a Wide World Web After All

From this brief article on Internationalization, it becomes apparent that the art and science of creating sites for global audiences requires a lot more preparation and planning than one might think at first glance. Developers and designers not working to address these issues specifically due to time or awareness will do well to at least understand the basic process of making sites more culturally savvy, and better prepared for any future global expansion.

One thing is certain: We not only are on a dramatic learning curve for designing and developing Web sites as it is, the need to localize sites is going to become more and more a part of the day to day work. Understanding aspects of what makes a site international and local will not only help you expand your skill set and make you more marketable, but it will also expand your understanding of the world and the people within it, how they relate to and use the Web, and how you can help make their experience the best one possible.